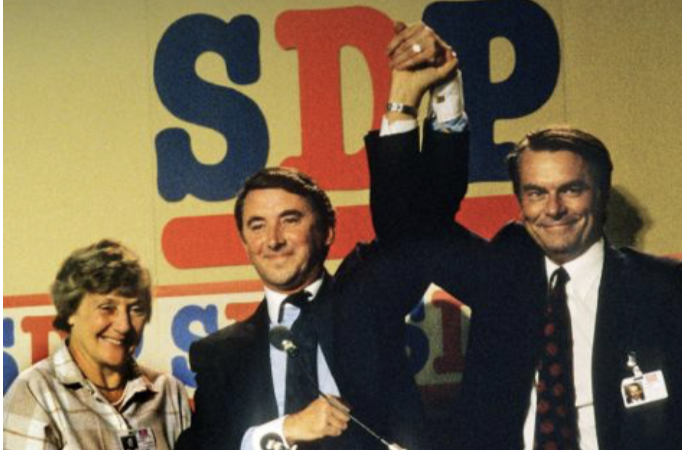 “…Disowning the largest democratic vote in our history, and commitments made as recently as the 2017 general election to deliver in parliament the referendum result, is, to put it mildly, an odd basis for starting a new centre grouping intended to destroy the other two parties, as the Independent Group of MPs did last week…

“…Of course, in the Independent Group MPs leaving their parties, there are some similarities to the creation of the Social Democratic Party (SDP) in 1981. Yet 38 years ago the debate in the Labour Party turned on two vital policy issues.

“Michael Foot… refused point blank to promise a referendum before withdrawal from the common market, and reiterated his commitment to full unilateral nuclear disarmament involving Nato.

“In our Limehouse declaration… there was a specific disavowal of any intention of creating a centre party. We pledged to take the Marxist/Trotskyist, authoritarian, trade union-dominated, block vote, policy-making Labour Party head-on in a bare-knuckle fight to replace or transform it.

“…It was when Shirley Williams declined to stand in the Warrington by-election and Roy Jenkins did so instead (he went on to become party leader by beating me, not Shirley) that we became irretrievably linked with the Liberals as a centre party.

“If this Independent Group of MPs now goes down that same centrist route, it may well, like Nick Clegg, form a coalition with the Conservatives, but not with Labour.

“…All is not yet lost for the Labour Party if more of its MPs join the Independent Group.

“…It is imperative, however, that Corbyn agrees to step down as early as 2020, when he will be 71, for a younger leader not afraid of being called a socialist but able to present themselves as a modern prime minister not tarred by the past and ready to work with the Scottish National Party in government.

“There is a traditional Labour agenda out there, somewhat reminiscent of 1945’s, ready to be grasped in modern form…”