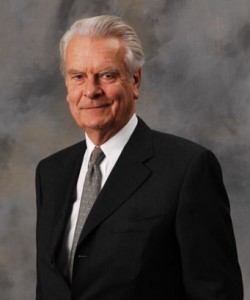 David Owen was a Member of Parliament for Plymouth for 26 years from 1966-92. Under Labour Governments, he served as Navy Minister, Health Minister and Foreign Secretary. He was co-founder of the Social Democratic Party and its Leader from 1983-87 and 1988-90. He was created a Life Baron – Lord Owen of the City of Plymouth – in 1992 and sits as an independent social democrat in the House of Lords.

From 1992-95 Lord Owen served as EU peace negotiator in the former Yugoslavia working alongside the UN appointed peace negotiator, Cyrus Vance. Together they co-authored the Vance-Owen Peace Plan.

Lord Owen’s extensive papers relating to his time as Co-Chairman are lodged with the Special Collections and Archives Department of the University of Liverpool and are now fully open to researchers.  They are probably the best record that exists anywhere. The collection can be viewed here: Special Collections Archive. If you wish to make enquiries or arrange a visit to access the papers please contact: scastaff@liverpool.ac.uk or tel: +44 151 794 2696.

All Lord Owen’s other papers covering his whole period as a politician together with other material relating to his family life are also held by the University of Liverpool Library and can be viewed here: David Owen Papers

David Owen was educated as a physician at Sidney Sussex College, Cambridge and St Thomas’s Hospital, London where he was a Neurological and Psychiatric Registrar from 1964 to 1966 and Research Fellow in neuroscience in the Medical Unit from 1966 to 1968. He is an Honorary Fellow of Sidney Sussex College and the United Medical and Dental Schools of Guy’s and St Thomas’s and a Fellow of the Royal College of Physicians.

In the early 1980s Lord Owen served as the Treasurer of the Palme Commission on Disarmament and Security Issues and was also a member of the Independent Commission on International Humanitarian Issues; Carnegie Commission on Preventing Armed Conflict; and from 1990-2001 Chairman of Humanitas, a charitable organisation dedicated to public education on humanitarian issues. Lord Owen is currently a Director of the Center for International Health and Co-operation which has established an intensive four-week diploma course in International Humanitarian Assistance held three times a year in Geneva, New York and in one other, usually developing, country.

Lord Owen was Chancellor of Liverpool University from 1996-2009.

Lord Owen has been associated with several political campaigns since leaving the House of Commons. He was Chairman of New Europe from 1999-2005, a cross party organisation that successfully campaigned against the UK adopting the euro. In January 2010 prior to the general election he helped establish a new website, www.charter2010.co.uk, a forum and information source aimed at planning for a hung parliament. In March 2011 he joined the “No to AV, Yes to PR” campaign.

In 2016 believing that the EU had become dysfunctional, and opposed to the inexorable direction towards a federal United States of Europe, he concluded it was in the best interests of the UK to leave the EU and supported and campaigned for Vote Leave in the EU referendum.

He was Chairman of the Trustees of the Daedalus Trust charity from 2011-2017 which promoted research into personality changes associated with the exercise of power in all walks of life, what Lord Owen termed Hubris Syndrome. All Lord Owen’s speeches on the subject are available in the Hubris Syndrome section of this site.

The Daedalus Trust has now merged with the Maudsley Philosophy Group (MPG) at the Institute of Psychiatry. One or two Daedalus Trust members are Trustees of MPG to ensure some continuity but the Trust itself ceased as a separate entity and charity as from October 2017.

The website associated with the Daedalus Trust will remain active under the aegis of the Maudsley Philosophy Group www.daedalustrust.com

Lord Owen plays an active role in the Campaign for the NHS Reinstatement Bill: www.nhsbillnow.org campaigning to reverse the deeply damaging effects of the 2012 Health and Social Care Act and to roll back the continuing marketisation of England’s health service.

He is the author of numerous publications in the field of health and politics including his autobiography, Time to Declare (1991) Balkan Odyssey (1995) and The Hubris Syndrome (2007 & 2012). He also published in 1992 an anthology of poetry Seven Ages: Poetry for a Lifetime, proceeds of which are donated to Great Ormond Street Hospital.

In Sickness and In Power: Illness in Heads of Government, Military and Business Leaders since 1900 (hardback 2008, updated paperback 2016) is a unique study of illness in Heads of Government during the last 100 years and considers how illness – both physical and mental – can affect the process of government and decision-making. The updated 2016 edition includes additional chapters featuring examples from military and business life.

In 2009 Liverpool University Press published Lord Owen’s book Nuclear Papers which gives a new insight into the background and arguments around the last major strategic study of the UK’s nuclear deterrent, making available for the first time newly declassified government papers on nuclear weapons. Also in 2009 an updated, abridged version of his autobiography was published by Politicos entitled Time to Declare: Second Innings.

In 2012 a paperback and ebook entitled Europe Restructured: The Eurozone Crisis and its Aftermath was published. This set out the history of the UK’s equivocal relationship with the European Common Market, European Community and now European Union and suggested a blueprint for the restructuring of the European Economic Area to accommodate both those who wished to move towards a more integrated eurozone and those who wished never to join the Eurozone. Despite being endorsed by The Times of London these ideas were never taken by Prime Minister Cameron or Chancellor George Osborne.

In 2016 following David Cameron’s failed negotiation with the EU to seek reforms, Lord Owen updated his book and issued it as an ebook Europe Restructured: Vote to Leave as part of his support for Vote Leave during the EU referendum campaign.

In 2013 Lord Owen edited a book on Bosnia-Herzegovina which highlights the elements of the Vance-Owen Peace Plan which are of continuing relevance in guiding the present political debate of a still deeply divided country. The book releases for the first time fascinating primary source material of the intense international political activity in 1992-93.

In 2014 Lord Owen wrote The Hidden Perspective. The Military Conversations of 1906-1914 (Haus Publishing) in which he argues that the outbreak of war in 1914 was far from inevitable, and instead represented eight years of failed diplomacy. In the same year he released The Health of the Nation: NHS in Peril (Methuen) which presents a powerful case for the repeal of the worst aspects of the Health and Social Care Act 2012 and for the restoration of the NHS to its traditional values.

On 21 January 2015, Lord Owen featured in the What makes us Human series hosted by Jeremy Vine on on BBC Radio 2.

In 2016 Lord Owen published Cabinet’s Finest Hour. The Hidden Agenda of May 1940 (Haus Publishing) in which he makes a powerful case for seeing the vital British decision to fight on against the Nazis in May 1940 as the greatest moment for Cabinet government and collaborative politics, providing profound lessons for contemporary politics.

In the wake of David Cameron’s failed negotiations, Lord Owen campaigned in the 2016 referendum for the UK to leave the EU recognising that “Europe has moved away from us. Its elite chose a different path long ago to move in the inexorable direction of a federal United States of Europe and it is not a path the UK ever wished to follow.”

In 2017 he co-authored British Foreign Policy After Brexit with a former diplomat who voted ‘Remain’ that argued Britain’s global role and influence as an independent voice could be enhanced, rather than diminished, post-Brexit.

Hubris. The Road to Trump. Power, Populism and Narcissism,  an analysis of the mental and physical condition of political leaders past and present was published in 2018. An updated edition in paperback and Kindle, including a new chapter on Boris Johnson’s populism, was published in March 2020.

Lord Owen’s most recent book Riddle, Mystery, and Enigma: Two hundred years of British-Russian Relations (released October 2021) comes at a time when relations between Putin’s Russia and Britain are at an historic low, after the Salisbury poisoning and Russia’s attempted invasion of Ukraine.

His American wife, Deborah, was for many years a highly successful Literary Agent. They have two sons and a daughter and four grandchildren.