Article by Lord Owen published in The Guardian 8-9 June, 2012

The UN and Nato must heed the lessons of Kosovo and Bosnia: that diplomacy and force are effective only in alliance.

Kofi Annan, the UN special envoy to Syria, did not mince his words when the security council met yesterday. “If things do not change, the future is likely to be one of brutal repression, massacres, sectarian violence and even all-out civil war,” he said.

The UN’s current international impotence is devastating to behold, with Russia and China holding out against the US, Britain and France over the issue of foreign intervention in Syria. But this was the situation the world faced with Libya, as Gaddafi’s forces closed on Benghazi; the crucial change came when the Arab League demanded the security council intervene. We are at that point again, with the Arab League head, Nabil Elaraby, asking Ban Ki-moon to submit the fighting in Syria to the security council under chapter VII of the UN charter, as a threat to world peace and security… 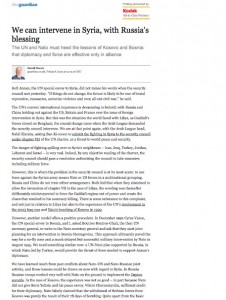