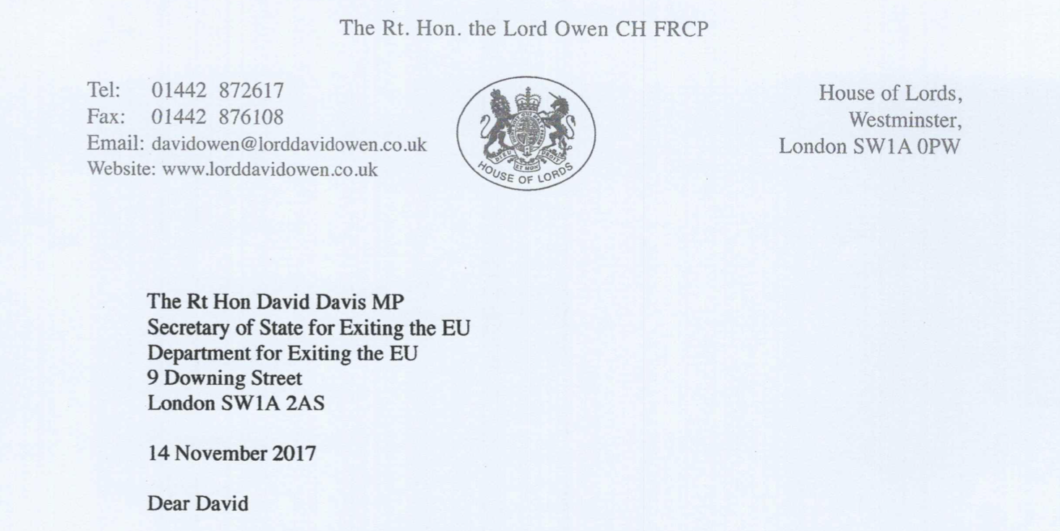 Further to revealing on 30 July his correspondence with the Prime Minister on the merits of the EEA, Lord Owen adds the following:

“In my view the reluctance to give chapter and verse about any legal opinion and their right of non disclosure using the legal professional privilege under the FOI Act is an indication, along with other imprecise and often inaccurate statements, that no such legal opinion on the important issues surrounding our UK signature to the the EEA Agreement was ever sought. This should have been done in 2015 after David Cameron won the General Election, before his pledge to hold a referendum.

“The really important document, however, is the legal opinion (attached) signed by three senior and well regarded people with expertise in this whole area. This opinion does give chapter and verse as to why the UK could remain in the EEA Agreement for a transition period of around two years as a non-EU Contracting Party from 31 March 2019 when under Article 50 we will be leaving the EU.

“During this time we will be able to negotiate a trade agreement with the EU along the lines of the Canadian CETA which was only recently negotiated by the EU with a considerable input from the UK. The issues are therefore mostly known and can be dealt with quickly.

“This is a far better option than the Chequers agreement which has been substantively rejected already by the EU in important areas for the UK. It is also a better option than leaving without any agreement. No deal is a fallback when all else fails.

“This option of transitioning out of the EU through the EFTA pillar of the EEA is a serious one, as this legal opinion makes clear.

“ONLY if the EU blocks this credible route and we fail under an appeal to international treaty dispute procedures should we contemplate leaving without any agreement.”

Lord Owen reveals correspondence with the Prime Minister on merits of the EEA for transition period.