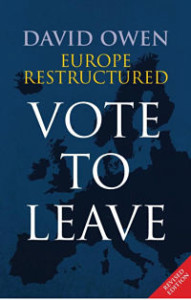 “To remain in the EU is in my judgement a more dangerous option for British security in its deepest sense – economic, political, military and social – than is being admitted or even discussed in the wake of Cameron’s failed negotiations.”

In an historical analysis of the UK’s membership of the EU, Lord Owen concludes it is time for the UK to leave the EU in the forthcoming referendum. In his book ‘Europe Restructured: Vote to Leave’, first published in 2012 and now extensively revised and updated to take account of his decision to support VoteLeave, Lord Owen recognises “that Europe has moved away from us. Its elite chose a different path long ago and it is not a path the UK ever wished to follow.”

Read the press release accompanying the launch of the updated version of ‘Europe Restructured’ here: VoteToLeaveRelease

A PDF copy of the book is available here: Europe Restructured 160301